Tis the time of You Tube. And many people around the world are making a name for themselves through this platform. One such name is that of Dina Tokio, a British Muslim Hijabi, now a YouTube star. She is a hijabi, makes casual fashion videos, daily blogs about her life and recently did a series for You Tube.

In recent years, Muslim fashion designers on small level are creating some ripples in the bigger fashion industry. You Tube is one such platform through which hijabi Muslims all over the world have been sharing their creativity, fashion styles.

The likes of Dina Tokio, Halima Aden and other young women are breaking Muslim stereotypes in their countries. They are making statements by showing that Muslims can be fashionable yet modest.

Dina Tokio has made You Tube videos for the past 8 years. Her channel started off with a rather young girl teaching how to style a headscarf. Over the years her videos and sense of style have both matured in content and ideas. She has taken her modest fashion awareness to a broader level.

Last year she make a series of videos called “Your Average Muslim” in which she interviewed young Muslim women excelling at their profession while still being modest and hijabis.  The series aims at breaking stereotypes, at showing the world there is more to Muslim women.

The interviewees include a hip-hope dancer, a power lifter, and a prison community development worker. The comments under the series have stirred a little debate regarding the clash between dancing and wearing a hijab; rest of comments praise Dina for her work.

Recently the online community also saw Dina making it to the Vogue as the “New Suffragettes”. She’s also part of YouTube’s Creators for Change campaign.

Dina Tokio talks about how over the years, high street brands have also added variety to their clothing line that are suitable for Muslim women as well. She remembers that finding appropriate stylish clothing was hard to find. She feels that the high street brands seem to have noticed and made their clothes inclusive for women with different tastes and requirement.

Is this a conscious move on the part of the brands or just a demand for more variety but not specifically for the Muslim women? 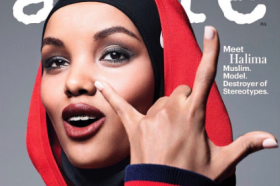 The YouTube Creators for Change campaign brings together creators from around the world who inspire their audiences with messages of tolerance and acceptance, with their annual summit taking place in London yesterday.

YouTube Creators for Change campaign is about the YouTube creators who inspire their viewers all over the world.

Today we have hijabi women like Ibtihaj Muhammad, an US Olympic fencer who has made a name for herself in recent years. So much so that recently a barbie wearing a hijab has been designed after her.

You may also like From rags to riches-Najat Vallaud Belkacem

View All
Scroll Up
MENU